Home » Show Notes » How to Overcome Criticism While Pursuing Purpose

How to Overcome Criticism While Pursuing Purpose 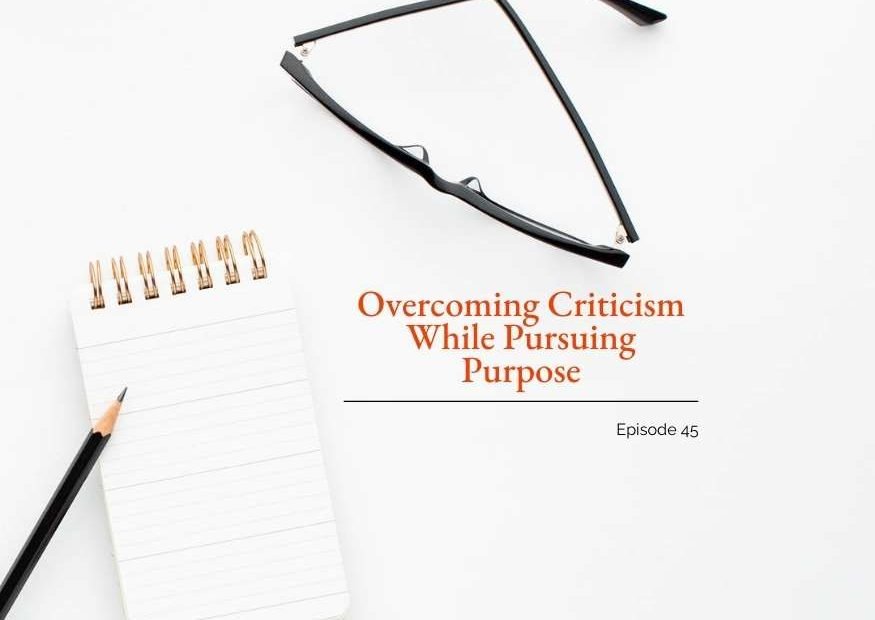 Criticism says more about the criticizer than the person receiving it. It still hurts though, so this is all about how to overcome criticism.

Recently, I was reading the book of Matthew and came across the verses that spoke to how unsatisfied and critical people can be sometimes; especially when they don’t understand your calling or assignment.

Specifically, Matthew was writing about how people criticized John the Baptist for doing one thing and then criticized Jesus for doing the opposite.

John the Baptist lived an ascetic, strict lifestyle. Most people today would probably call him weird. He dressed different. His preaching style was confrontational. His diet was limiting. He ate locusts and wild honey and didn’t drink wine or liquor. He was just a very different man.

But John the Baptist was in the wilderness both figuratively and literally for a purpose.

His purpose was to prepare people for Jesus’ arrival. The prophet Isaiah referred to John the baptist as the person who would prepare the way for the Messiah. OK? That’s his purpose.

So he was out in the wilderness, baptizing tons of people in the Jordan River.

John was doing his best to fulfill his calling. He was encouraging people to confess their sins, repent, and be baptized and he was committed. Yet, at the same time, people were criticizing him because of his strict diet and because he didn’t drink wine and liquor.

Then, sometime later, Jesus pops up on the scene, right? And He’s out here eating, drinking wine, chilling with sinners, and people criticized Him. They called Him a glutton and a drunkard.

This just goes to show that some people will never be pleased. While Jesus is talking about all of this in chapter 11 of Matthew, He points out that wisdom is shown by what people do. It’s shown by their actions.

In other words, the critics of Him and John the Baptist proved that they lacked wisdom. They were completely off when they criticized  both John the Baptist and Jesus. They lacked the ability to apply spiritual truth to situations. That’s what wisdom is.

Since they lacked wisdom, they criticized these two people who were walking in their purpose. Some people will do the same to you. Your actions in pursuit of purpose won’t make sense to them.

Before we dive into why people do this and how to overcome criticism, let’s define criticism. 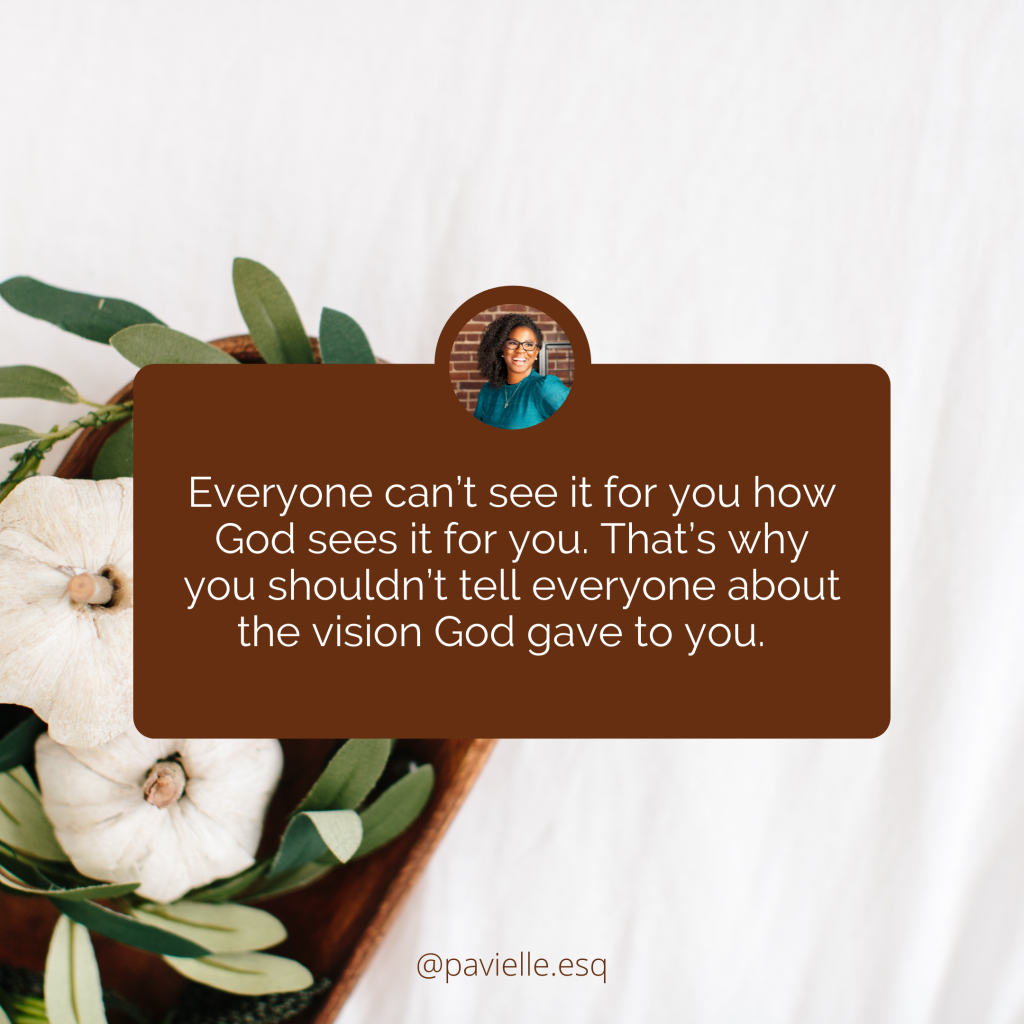 We can’t have a discussion about how to overcome criticism without defining the word. Criticism is the act of finding fault and pointing out the faults of others. It’s a form of judgment.

I’ve learned that criticism is an addiction. In fact, it’s highly addictive behavior. The truth is, people don’t even realize they’re doing it. They just have this compulsion to critique every little thing they see.

To further explore how to overcome criticism, I want to break down why people decide to criticize. A great example is the criticism of John the Baptist. Those who criticized John the Baptist and Jesus showed that they ultimately lacked wisdom. They not only lacked the ability to make spiritually informed decisions for themselves, but they also lacked the ability to discern when others are making spiritually informed decisions.

The same applies to your critics. Those who criticize your pursuit and journey in purpose, lack wisdom. They are not wise.

Here are some other reasons why people criticize:

It has nothing to do with you. In fact, When people criticize something or someone, it usually doesn’t have anything to do with what they’re criticizing. “Criticism is an easy form of ego defense. We don’t criticize because we disagree with a behavior or an attitude. We criticize because we somehow feel devalued by the behavior or attitude. Critical people tend to be easily insulted and especially in need of ego defense.”

Sometimes people are too close to you to really SEE you. Remember when Jesus said, “A prophet is honored everywhere except in his own hometown and among his relatives and his own family.” He was speaking from experience. Jesus went to his neighborhood and people literally scoffed at him. I’m sure they were probably like, “oh He’s just a carpenter.” They were deeply offended that Jesus tried to preach to them and they refused to believe in Him. The thing is, they were too familiar with Him to respect Him.

The final reason I’m discussing in this post of why people criticize is actually projection. People criticize what they are afraid of and what makes them insecure. Let’s tackle these one at a time, starting with insecurities.

How to Overcome Criticism

If you want to know how to overcome criticism, then here are some tools I recommend:

That wraps up this episode of how to overcome criticism. I hope this has been helpful.

“I love The Purpose Collective podcast.” <– If that sounds like you, please consider rating and reviewing my show! This helps me support more people — just like you — move toward the online life and business that they desire. Click here, scroll to the bottom, tap to rate with five stars, and select “Write a Review.” Then be sure to let me know what you loved most about the episode!

Want to Support the Show?

If you would like to support the show, I discovered a super cool way for you to get in on the action, and that is by “buying me a coffee.” I don’t actually drink coffee, but the idea behind the site is for supporters of Content Creators (that’s you) to be able to help the Creator (that’s me) with expenses required to produce the content they create (that’s the show).

If you want to connect with other purpose-driven movers and shakers, then join The Purpose Collective Community on Facebook. It’s exclusive and FREE.

If you have any questions you can always email me at podcast@pavielle.com or join my Purpose Diary newsletter below and my tips, experiences, and advice about navigating a life of purpose are all yours, every week!

Disclaimer: If you happen to purchase anything I recommend in this or any of my communications, it’s likely I’ll receive some kind of affiliate compensation. Still, I only recommend things that I truly believe in and have personally experienced. If you ever have an issue with anything I recommend, please let me know. My goal is to help you thrive in your purpose. — Pavielle